Ras Simeon spent weeks this summer standing in front of a government office holding a cardboard sign demanding respect for his religion and one practice in particular. “To deny me the holy herb for my sacrament is to deny me my human rights,” said the elder from Guyana’s Rastafari community.

And for a moment, it seemed as though the Rasta community’s decades-long call to end the criminalization of marijuana would finally be answered.

The demand for the right to grow and use marijuana for spiritual ceremonies flared into a visible protest movement after a violent police raid on the house of a Rastafari elder in late June turned up less than five grams of marijuana and sent him to the city jail for two days. Beating drums in the heat, dozens of Rasta men, their dreadlocks wrapped neatly around their heads, demonstrated in front of the attorney general’s office after his release.

The Rastafari Council quickly picked up endorsements. Georgetown’s mayor, Ubraj Narine, declared that “marijuana has been in this country and Caribbean culture for centuries” and questioned anti-narcotics agencies’ “vigorous campaign” to “jail users of marijuana even for medicinal or religious use.”

The Rasta movement also won support from the Inter-Religious Organisation of Guyana, which noted the importance of marijuana to the country’s large Hindu population. Some Hindu religious texts list marijuana as one of the world’s most sacred plants, with significant medicinal and spiritual benefits.

But the surge in attention has subsided, and Rasta elders fear that the momentum has fizzled. A proposal to decriminalize marijuana languishes in Parliament and the Rastas are skeptical of promises from Attorney General Mohabir Nandlall that the bill will be taken up in the coming session.

“This issue should have been a priority. They wanna see several hundreds or thousands of people standing in front of them before they do something,” said Ras Khafra, the general secretary of the Rasta Council. The community, he said, is increasingly worried the Guyanese government is falling back into old patterns, holding out the possibility of decriminalization, then letting it drop because the issue is overtaken by more urgent concerns.

The Rastafari population in Guyana, a small country on South America’s North Atlantic Coast, numbers just 4,000 people and is more visible than that figure would suggest. It’s a tight community, with large, extended families packed into single-family homes. They face discrimination from the government and society at large, which makes it difficult to find employment and housing.

Marijuana, what the Rastas call the “holy herb,” is held in a wooden chalice and consumed continuously. It is up to each individual to determine the ideal intake. The community grows a collective crop of cannabis plants that is shared by all. 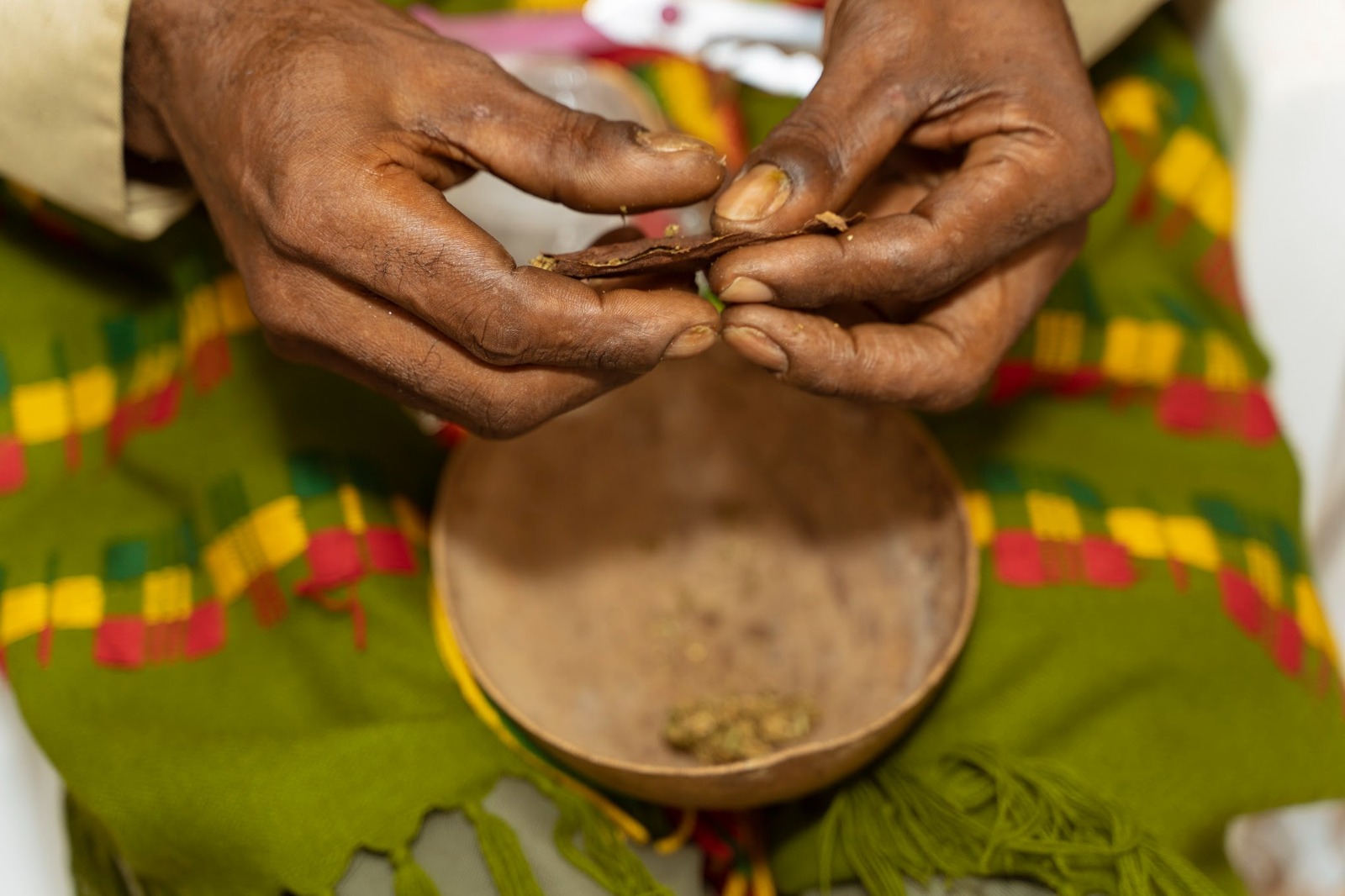 The holy herb is prepared in a wooden chalice. Photo: ​Travon Barker for VICE World News.

That devotion to marijuana often gets tangled in the net of Guyana’s draconian drug laws.

A conviction for possession of marijuana carries punishments that can include high fines and prison time, from three years up to life in prison if charged multiple times. Police officers do not need a warrant to search a person or a vehicle for drugs. “Most everyone I know in the Rastafari community has been sent to prison at least once,” Khafra told VICE World News.

A 2018 report by the Caribbean Community (CARICOM) called Guyana’s drug laws an “extreme invasion” on the right to freedom of religion, saying there was a “sparseness of a clear argument for illegality on moral grounds.”

Khafra alleged that police use the drug laws as an excuse to subject Rastas to public harassment. “There have been many raids on our church grounds, because they know that we plant cannabis there, and we’re not going to stop, because we utilize it. When police see a Rasta, they will stop him for a search. It’s best to pay someone a bribe; if they search you and they find money, they’re going to take all of your money anyway,” Khafra said.

Simeon, the elder and protester, believes the reluctance of the government to soften its stance on marijuana stems from inaccurate and prejudiced views about the Rastafarian lifestyle. “They see Rasta as a madman, big scary Black people, dreads, smoking drugs, burning money, burning flesh,” he said.

The current laws are a form of religious persecution, said Khafra, noting that even during the height of anti-drug arrests and prosecutions in the United States in the 1980s, certain Indigenous groups were given special permission to consume peyote for religious ceremonies.

“People don’t want to be around Rastafari based on these false perceptions about the drug. We carry that burden more than any other group in the Caribbean,” he said.

Jamaica, the country with the highest concentration of Rastafarians, decriminalized the use of marijuana in 2015 after years of public lobbying from the Rasta community, a case that serves as the primary inspiration for the Guyanese decriminalization movement.

The bill before Parliament would allow anyone found with less than 15 grams of marijuana to avoid the usual three to five years of prison time and complete six months of community service instead.

Although the bill was introduced in January, it has stalled and the Rastas continue to face arrest on possession charges.

Opposition politician Sherod Duncan, a member of the special committee addressing the decriminalization bill, told VICE World News: “I want to contribute in any way I can” to the fight for decriminalization. But he could not explain Parliament’s delay.

Duncan’s own decriminalization bill, a petition to allow possession of half a kilogram of weed, was rejected by Parliament in January. The minister of education, Priya Manickchand, called the bill “sanctimonious gangsterism.”

Guyanese President Irfaan Ali has sidestepped the question when asked by local news outlets about the possible decriminalization of marijuana.

Simeon describes marijuana as the all-important bridge connecting his consciousness to god and the angels. “The smoke leaves our noses, our mouths, and ascends, and the almighty is traveling down. When I use the holy herb, it helps to vanquish the evil, to be pure, to ascend, to have the union with the creator.”

Asked his age, Simeon responded, “I am as old as time.” His speech swims with metaphor and follows the same hypnotic pattern, so it is nearly impossible to tell if he is speaking or chanting, an integral part of Rastafarian worship.

The delay in Parliament will not stop the Rasta elders, who said they will keep protesting until they are granted the right to celebrate their sacrament without fear of imprisonment, beatings, robbery, and fines.

“I cannot deny humankind the use of this holy herb,” Simeon said. “This is the purpose of the holy herb: Its ingredients are love and happiness and harmony.”